Earlier today, Microsemi Corp. (Nasdaq: MSCC) announced that it acquired a defense electronics and security business from our Buzz Stock of the Day — Endwave Corp. (Nasdaq: ENWV) — for $28 million in cash and the assumption of specified liabilities.

Endwave’s D&S group has developed many innovative, state of the art products and has won several contracts to supply these products on major systems projects with many current Microsemi customers such as Boeing, Cobham, L3, Lockheed Martin, Northrop Grumman, and Raytheon.

Shares of Endwave were up as much as 51 percent today on the news.

“We reported two very positive events today,” said Ed Keible, Endwave’s CEO and President. “First, we were pleased to see our overall revenues expand, compared to Q4 2008, driven primarily by demand from our key telecom customer. Second, Microsemi Corporation acquired the assets of our non-telecom products business. The decision to divest our non-telecom operations was a difficult decision for us, as we believe that this business has great promise. However, Microsemi has the scale and funding needed to take this business to the next level, the price offered by Microsemi was one we determined to be in the best interests of our stockholders, and we believe this transaction may help clear the way for other strategic alternatives that may be available for our communication products business.”

Endwave, together with its subsidiaries, engages in the design, manufacture, and marketing of radio frequency (RF) modules that enable the transmission, reception, and processing of high frequency signals in telecommunication networks, defense electronics, homeland security systems, electronic instrumentation, and other applications that require high frequency RF circuitry and subsystems.

Our Buzz Stock of the Day — Sharps Compliance Corp. (OTCBB: SCOM) — provides medical waste disposal solutions for the healthcare industry and U.S. consumers. The Houston-based company’s flagship product, the Sharps Disposal by Mail System, is used to dispose of medical waste including hypodermic needles, lancets and other medical devices and objects used to puncture or lacerate the skin.

Sharps Compliance Corp. reported a sharp increase in Q3 profits, thanks in large part to a recently announced $40 million contract with an agency of the U.S. Government Customer billings. Revenue for the third quarter increased to $6 million, from $2.9 million a year earlier. Revenue for the nine-month period ended March 31, 2009 increased 35 percent to $13.6 million, compared to the same period last year.

“Our third quarter results reflect the success of our full-service medical waste management solutions and the business model that we have developed as we execute our first large scale government contract,” said the company’s chairman and CEO, Dr. Burton J. Kunik. “We have created a convenient, cost-effective and safe method to properly dispose of medical and pharmaceutical waste in locations outside of the hospital setting to include homes, alternative care facilities, retail clinics, industrial and commercial facilities and emergency management programs.”

Gross margin for the quarter was 59.2 percent, compared to 49 percent a year earlier. Operating income, or profit realized from the company’s operations, was $2 million or 33.2 percent of revenue for the quarter, compared with an operating loss of $100,000 for same period a year ago.

There is a growing interest for the company’s RXTakeAway(TM) line of products, according to a recent earnings release.

“We believe our new line of products address a very serious disposal issue in the country that is currently harming our environment and placing our children at risk,” said Kunik. “Our existing solutions and infrastructure are uniquely positioned to facilitate the proper and cost-effective disposal of unused medications in the consumer / community markets.”

Click here for the latest micro-cap picks from the pros! No spam. No fee. 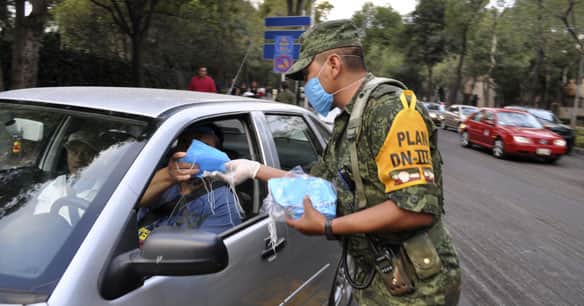 Shares of niche makers of antiviral products were up on Monday following news that we could be facing a global pandemic of the swine flu virus.

The Philadelphia-based company’s flagship products include Alferon N Injection(r) (FDA approved for a category of sexually transmitted diseases) and the experimental therapeutics, Ampligen(r) and Oragens.

Hemispherx just announced that it received notice of an Annual Report prepared by a director of the National Institute of Infectious Diseases (NIID) to the governing organization of the Japanese Ministry of Health that reported a series of successful preclinical studies in new pandemic vaccines that rely critically on Ampligen, the company’s experimental RNA nucleic acid being developed for globally important immune system disorders.

Hemispherx’s Japanese partner, Biken Corp., recently completed a series of preclinical tests on Ampligen that were necessary to complete a new product registration in Japan.

Cancer treatment developer Abraxis Bioscience, Inc. (Nasdaq: ABII) announced a $100 million share repurchase program on Monday– a clear sign that management believes the company’s shares are undervalued at current levels. The repurchase of shares will be funded by internal cash resources and made through open market purchases.

“We believe our shares are undervalued and that our strong financial position makes the purchase of our own shares a sound investment at this time,” said Abraxis’ chairman and CEO, Dr. Patrick Shoon-Shiong.

But the real story at Abraxis, is ABRAXANE, the company’s tumor-targeting cancer treatment that use a protein called albumin to deliver chemotherapy, and does not contain chemical solvents. This eliminates the need for pre-medication with steroids or antihistamines, and significantly reduces the amount of time it takes to administer the treatment.

Last year was a busy year for Abraxis. When the company began “2008, we were commercializing ABRAXANE in the United States and Canada and approval to do so in India,” said Dr. Shoon-Shiong. “By the end of the year, we had commercialization approval in 36 countries.”

The company has also stepped up its marketing efforts in China, and is pushing ahead with the commercialization of ABRAXANE in Japan and Russia.

The company has to restructure its sales force after it ended its two-year, co-promotion agreement for ABRAXANE with Astra Zeneca. However, in an earnings call, Dr. Shoon-Shiong stated that the company could start seeing the benefits of its restructuring in the second half of the year.

Abraxis’ EU sales force in the European Union is provided by Innovex, a unit of Quintiles Transnational Corp. The company currently has five sales representatives in the UK, eight in Germany and expects to add eight in Italy this year and an additional sales force in Spain.

ABRAXANE was launched in the UK in December 2008, and the company plans to “continue this roll-out to additional nations in Europe on a country-by-country basis,” said Dr. Shoon-Shiong.

Abraxis is in good shape financially. As of December 31, 2008, the company had $607 million in cash and no long-term debt.

“I think the second half of 2009 would be a very exciting time for us,” said Dr. Shoon-Shiong.

The Providence Service Corp. (Nasdaq: PRSC) stated today that it expects first quarter earnings per share of at least $0.35, a dime higher than the First Call consensus of $0.25. The social services management company stated it expects revenue or between $180 million and $185 million, higher than the $179.7 million analyst consensus.

Earlier this month, the Tuscon-based company announced that its Logisticare subsidiary won a $300 million contract from the New Jersey Department of Human Services to provide non-emergency transportation services for the fee-for-service in selected counties in New Jersey. The contract is expected to take effect on July 1, 2009, and has an initial term of three years with two, one-year renewal options that run through 2014.

Your browser does not support iframes.

Shortly before the contract was announced, SunTrust Robinson Humphrey analyst, Mark Hughes upgraded his rating on the stock to ‘buy,’ from ‘neutral. Hughes has a $12.00 price target on PRSC.

We like PRSC because the company generates cash from operations, has a small float and has year-over-year revenue growth of about 80 percent. The Providence Service Corp.’s 2008 revenue increased 143 percent to $691.7 million from $285.2 million a year earlier. Excluding a $169.9 million and an expense related to accelerated vesting, the company generated EBITDA of $39.1 million from $30.7 million a year earlier.